With an educational approach that incorporates science, technology, engineering, the arts, and math – or STEAM – the 173,000-square-foot school is the primary facility for the Montour Elementary School district and serves Robinson and Kennedy Townships, Pennsbury Village, and the Boroughs of Ingram and Thornburg.

The SRS 3 panels enabled the school’s distinctive curved roof to become a reality, thanks to their long panel lengths and versatile installation. The panels were ideal because they could be field-formed to suit the project’s needs and could be installed quickly and easily.

“The most unique aspect of the project was the field rollforming and field curving of the roof panels,” explains Randy McClure of Essig-McClure, the CENTRIA product dealer. “All of the material arrived on the site exactly when it was needed, and Pennsylvania Roofing Systems was able to set up on a low roof and produce and distribute all of the panels.”

The Concept Series panels were specified in a range of colors: Cavern Clay, Regal White, Brick II, and Silver Gray. All were used strategically across the façade to enhance visual interest and generate a playful character.

The Montour Elementary School was completed in August 2017 in time for the school year. The lead architect was Pittsburgh-based Architectural Innovations, and general contracting services were provided by Lobar Construction. The CENTRIA dealer was Essig-McClure, Inc. and the installer was AP Metal Sales and Pennsylvania Roofing Systems.

CENTRIA innovations in architectural metal wall and roof systems are helping building teams around the world envision metal as the future of the building envelope. From inspiration through installation, CENTRIA provides the highest level of expertise including service and support from an elite Dealer Network. Based in Pittsburgh (Moon Township, Pa.), our metal architectural systems are the perfect combination of science and aesthetics, offering advanced thermal and moisture protection technology, the broadest spectrum of design options, truly integrated components, and superior sustainability. CENTRIA is an NCI Building Systems (NYSE:NCS) company. Visit us at www.centria.com.

100 Years of CENTRIA How does CENTRIA continuously engineer and manufacture the world’s most advanced building envelope wall and roof panels, integrated components and coating systems? The pursuit of excellence has been central to the success and growth of CENTRIA and its predecessor companies — H.H. Robertson, E.G. Smith and Steelite — from the very beginning.For over 100 years, CENTRIA has successfully navigated tremendous change throughout the building products industry. We’ve been able to do this by being innovators, continuously relying on the most advanced technology to develop unique products that further the art of commercial architecture. CENTRIA's foundation is built on year's of product and design innovation. Explore some of our most important milestones throughout a century of innovation. 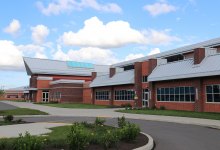