LOUISVILLE, KY… Metal Sales Manufacturing Corporation is a company committed to birthdays. After all, it has joined the Making Strides Against Breast Cancer campaign that declares, “A world with less breast cancer is a world with more birthdays.” Metal Sales shows its commitment by supporting a team of individuals who are actively working to raise awareness and funds to fight the terrible disease.

The team, comprised of about 40 Metal Sales employees along with family and friends, has been officially dedicated to the cause since 2008. So far, they have raised over $12,500 for the American Cancer Society Making Strides Against Breast Cancer campaign. Metal Sales has matched that contribution dollar-for-dollar, bringing the total donations to over $25,000 at present.

The team’s primary fundraising efforts are focused on participating in the annual Making Strides 5 km walk through Louisville, KY, but the commitment does not stop there. The team has hosted hugely successful community bake-sales, a company roller-skating night, and actively encourages community members and Metal Sales employees to donate online.

Team member Tammy Austin, a Credit Claims Specialist at the Sellersburg, IN Metal Sales branch is planning a night of bluegrass “jamming” for her community to raise funds. The event will include 4 local bands that have agreed to donate their time and talents. It will take place at the Henryville Community Center in Henryville, IN on April 16. Donations for the campaign will be collected at the door, and prizes will be raffled off.

“We have had a very positive response from the community,” explains Tammy. “Breast cancer touches everyone, and people want to support the campaign. I think this is going to be a big event.”

With two sisters who are diagnosed with breast cancer, this cause is very close to Tammy’s heart. As soon as she heard about the Making Strides team, which is based at the Metal Sales corporate office in Louisville, she asked to join. Since then, she has worked with her Metal Sales teammates to fight for the cause.

“Metal Sales has been very generous,” continues Tammy Austin “It’s so motivating to know that the company will match our contributions. It validates our efforts and makes every dime we raise that much more important.”

The team was formed in honor of Metal Sales employees Kelly McCutcheon, a one-year survivor at the time, and Sherry Petty, who had been recently diagnosed. Soon after, Mary Webb, another breast cancer survivor, joined Metal Sales and promptly teamed up with the campaign.

“Realizing how many people are affected by breast cancer within our own organization really spurred this movement,” explains Denise Hall, Metal Sales Transportation Assistant and Making Strides team captain. “Everyone is influenced by the disease in one way or another, and we want to do our part to help fight it.”

In addition to the dollar-for-dollar match, Metal Sales has also purchased over $2000-worth of t-shirts and equipment for the team. The company has helped to host fundraiser lunches and promotes a monthly “jeans day” where employees’ contributions are rewarded with permission to dress casually.

“It’s great to feel support from Metal Sales,” says Kelly McCutcheon, Purchasing Administration Coordinator and now a 4-year survivor. “Not only have they been financially charitable, but they have also been willing to offer space and time to support the team’s efforts”

Efforts for the October 2011 Making Strides walk are already being put in place with several new fundraising ideas. The team’s goal for this year is to exceed their 2010 contribution.

By supporting a team with a big heart, Metal Sales is working to “create more birthdays” for employees like Kelly, Sherry, and Mary, and the millions of other breast cancer survivors worldwide.

Download
Metal Sales supports the Making Strides Against Breast Cancer team in the 2010 5K walk to benefit breast cancer survivors in Louisville, KY. The team is comprised of about 40 Metal Sales employees, along with family and friends. Metal Sales has been matching team contributions dollar-for-dollar since the team was founded in 2008. 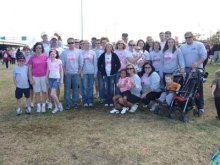