KENNETT SQUARE, PA… Metalwërks Sculpted™ 3D Rainscreen and Ameriplate™ wall systems were selected for the dynamic façade of the renovated Robert L. Bogomolny Library at the University of Baltimore.

“Metalwërks’ panel systems were the most sophisticated of the systems we considered and provided the clean, monolithic appearance we desired,” says Robert Matthew Noblett, Partner, Behnisch Architekten. “The aluminum plate formed a bigger expanse of panel across the facade, and it eliminated a lot of the clunkier jointing seen with other systems. We were pleased with how the panels attached to the building in an elegant way and allowed us to maintain our design vision.”

The University of Baltimore’s former Langsdale Library was in need of renovation, and Behnisch Architekten was the firm chosen to modernize the building and incorporate study areas and office spaces to better accommodate the students and current technology.

“The library presented a robust structure and was quite lovely inside, but there were few windows,” says Noblett. “It needed to become more of a learning center – something more flexible – in keeping with modern needs. Subsequently, we wanted to keep the building and repurpose it in some way because it was interesting with a unique character. “

As it was important to bring natural light into the space to optimally serve contemporary research and study, Behnisch Architekten strategically incorporated windows of varying sizes into the façade.

“With the new library, we took an expansive approach to daylighting and internal occupied space; the windows were carefully oriented to improve the experiences of the people inside,” Noblett adds.

Because of the unique size and shape of the system, Metalwërks fabricated it off-site, allowing it to be installed in unitized assemblies onto the façade. This method of unitization saved significant time and labor resources on-site.

“After we determined the window strategy, we wanted something more three-dimensional for the exterior, more opaque areas,” says Noblett. “We came up with the idea of a folded, metal ribbon of sorts from the underside of level two to the top of the building. We achieved this with Metalwërks panels, which brought an animated character to the building façade, and transformed it into something more dynamic.”

The use of rhythmically-spaced simple vertical piers and irregularly-shaped, protruded triangular rainscreen panels not only add texture to the façade, but also cover the spandrel units between the windows.

Altogether, 208 wall unit assemblies clad the exterior façade of the library. Additional flat wall panels made of Metalwërks Ameriplate Spline were designed to conceal the door openings at street level.

The project was completed in the Fall of 2018. The architect was Behnisch Architekten, and A.C.Dellovade, Inc. installed all the rainscreen accessories on the vertical backup wall, in coordination with the Metalwërks layout of wall-mounted cleats.  The unitized assemblies were fabricated from solid aluminum plate in Metalwërks’ facility in Elkton MD.

Founded in 1968, Metalwërks is the leading U.S. manufacturer of precision high-performance metal plate exterior facade systems, integrated curtain wall components, and custom architectural features. The company works in close collaboration with top architects to achieve new levels of form and function in systems precision-manufactured from solid metal plate. Metalwërks is unparalleled in the quality, diversity, integrity and reputation of its systems, services, and employees. For more information, visit: www.metalwerksusa.com.

Since 1968, Metalwërks has worked in close collaboration with top architects to achieve new levels of form and function in systems precision-manufactured from solid metal plate. Today, Metalwërks remains committed to innovating architectural plate systems that meet the ever-evolving aesthetic, functional, performance, and environmental requirements of architects and building owners.

Originally founded as a metal fabrication and contracting company, Metalwërks possesses a wealth of real-world experience and knowledge that informs every design and engineering decision that go into its systems and projects. This is a big reason why Metalwërks systems are more materially and structurally efficient, far more easily and affordably constructible, and why architects, owners, and contractors alike continue to prefer Metalwërks systems over alternatives.

As a family-owned company, Metalwërks takes ultimate pride in the high quality, integrity and good reputation of its systems, services, and employees. This unwavering commitment to quality is most evident in its craftsmanship, unparalleled in the industry.

Metalwërks stands behind all of its products to ensure absolute customer satisfaction. 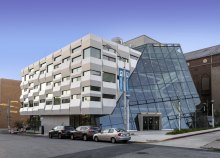 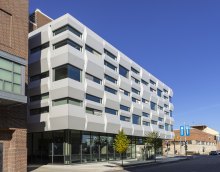